skip to main | skip to sidebar

1) The relief on the wall at "the Arch of Titus" in Rome depicts a scene of Roman soldiers carrying away the spoils of the Second Temple, in particular, the seven-branched candlestick, or candelabrum. The building of the "Arch of Titus" coincides with a time when men still saw, with their naked eye, the Menorah taken as booty from the ransacked city of Jerusalem. This relief, in my opinion, is more reliable than any other drawing which exists today.

2) A drawing in a book of one of the greatest religious exponents and commentators, known as "Kol-Bo" (a student of R. Aharon of Lunil, author of "Orchos Chaim") shows that the Menorah had an octagonal base, similar to that Menorah which was insculped in the wall at "the Arch of Titus" in Rome.

3) By the aforesaid accounts, we learn that the lampstand (Menorah) had a double, octagonal base (eight sides) built all around in the form of a step. The lower base was identical in design to the upper base, only larger in circumference. Each facet of the octagonal base was made with two vertical stiles and two horizontal rails; a top rail and a bottom rail, resembling a protruding frame set against a sunken panel. This said panel seemed to have had some intricate design insculped within it.

3) The Menorah was a solid piece of gold, as it is written: מִקְשָׁה תֵּעָשֶׂה הַמְּנוֹרָה. (Exodus 25:31)

4) By an oral-tradition, the Menorah stood 18 handbreadths high, or approximately, 1 meter and 62 cm., or about five feet and four inches, (Four fingers = 1 handbreadth. Each finger is estimated at 2.25 cm.) This measurement does not include the step-like platform upon which it rested.

5) In overall dimensions, the width of the Menorah was 2/3 that of its height. The lower base was just as wide as the most extreme part of the branches.

6) The central shaft of the candlestick, or candelabrum, bore a lamp which was kept alit always, and from its fire were the other candles lit. This central lamp was called the "Ner Ma'ravi," i.e. "the western-most candle." This name was applied to it because of the reasons we shall presently give.

7) The Talmud (Menachos 98b) carries a dispute between Rabbi El'azar and Rabbi Shimon regarding the position of the Menorah. Rabbi El'azar says that it was positioned in the antechamber of the Temple Sanctuary, running east and west along its south wall. Rabbi Shimon, on the other hand, says that it was positioned in the antechamber &c., running north and south at its south wall. The Jewish historian, Yoseph Mattithiah, a priest of Aaron's lineage who lived during the latter period of the Second Temple, says that the Menorah was situate obliquely within the antechamber of that edifice to the G-d of our fathers. (see: Antiquities, Book III, chapter VI, vs. 7). This accounts for why the central shaft was considered closest to the west.

From the description of the "gevi'im," based upon Rashi in Exodus 25:31 (Old French: madernes), it would appear that the "gevi'im" were shaped like unto beakers. Rashi goes on to say there (Exodus, ibid.) that these "gevi'im" were situate on the branches of the Menorah themselves; viz., three branches to each side, and the central shaft. The Talmud (ibid.) says that there were a total of twenty-two "gevi'im" on the Menorah, and a total of eleven "kaftorim" (knops).

Twenty-two divided by six gives us three, with a remainder of four. If we place two "gevi'im" on the central shaft, with a Cretian apple in its center, and three "gevi'im" on each of the two adjacent branches, divided at random by Cretian apples and flowers, and four "gevi'im" on each of the lower branches, divided at random by a Cretian apple and flowers, we are then able to see that the relief of the Menorah (shown in the URL link) meets very easily the description of the Menorah used in the Temple, and without the designers of that Arch ever having studied our holy books!

As for the flowers (Heb. perachim), the relief obviously shows clear signs of wear in certain places, besides being broken in other places. One can see something that resembles effaced images.
All this would tend to support the view that the Menorah depicted in the relief was indeed of gold, and not of some other substance, since the Gemara in Menachos 28b says that any Menorah made of gold must also have kaftorim gevi'im and perachim.
Posted by David Ben-Abraham at 2:56 AM 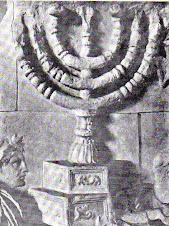